Abandoned pick up truck in state of disrepair

Reported via mobile in the Abandoned vehicles category anonymously at 17:54, Thursday 10 June 2021 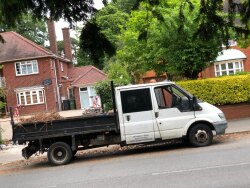 There has been an abandoned pick up truck with the windows smashed open in a state of disrepair outside number 21 Park crescent. There are also sandbags and let her outside the home that belong to the van that have not been picked up in several weeks