Abandoned vehicle not moved an inch since April!

Reported via mobile in the Abandoned vehicles category by Kazimierz Wielki at 10:05, Sun 30 May 2021 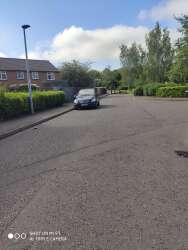 It appears the car has not been moved an inch since first reported in April. There was a council sticker warning the driver to remove that piece of rubbish on 4 wheels but has been removed from the car very same day in the afternoon. It's a hazard for all cars going un and out from Monarch Avenue. Can city council do something about it?