Shrubs removed at side 103 Livermore Green

Reported via desktop in the Parks/landscapes category anonymously at 14:52, Sun 25 October 2020 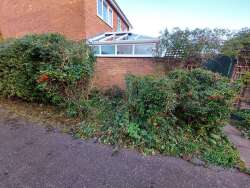 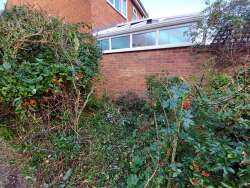 The shrubs at the side of our house were cut down last week. For unknown reasons the Buddleia bush and pyracantha shrubs around it were uprooted leaving a large gap which leaves our wall exposed. Also a climbing rose was damaged which was planted to deter graffiti which has happened in the past. Already this afternoon we have had some teenage boys banging on the windows and we are sure it will not be long before the wall is covered with graffiti againl. The shrubs in this location were uprooted previously by the contractors , quite some time ago it is true, and someone in the council arranged for them to be replanted and said the cutting plans would be altered to make sure they were not cut right down again. They have been cut down very brutally but it is the gaping hole in the middle that concerns us. Is there anything that can be down about this please as it does concern us about the repercussions. Thank you in advance for your help. Kind regards