Amazon parking vans on road and in layby

Reported via iOS in the Other public road issue category by Peterborough Fix My Street Community at 15:56, Sunday 2 August 2020 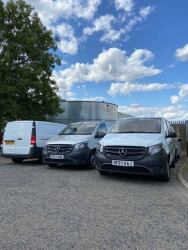 Report raised on behalf of community.

Amazon seem to be telling their delivery drivers to park their vans permanently and leave them around the streets and layby around Orton Southgate. The picture above shows 6 vans which have just been left. This is unacceptable, please investigate and stop them from doing this.