Reported in the Abandoned vehicles category anonymously at 15:03, Wed 8 July 2020 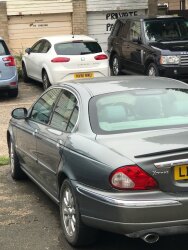 Although this car was reported more than 6 months ago, and you apparently contacted the owner it has not moved. It still has not been taxed or MOTed He owns the Zafira parked next to it which also hasn’t moved for many months although this car appears to be taxed and MOTed Why has the jaguar not been seized despite you knowing about it for so long