Reported in the Abandoned vehicles category anonymously at 10:16, Thu 11 June 2020 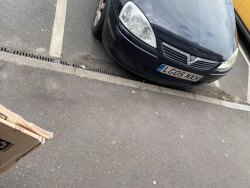 I have been working in the shop on Whittlesey Road for some time now and the car is always in the car park. I understand it is a shared car park but the car is always there from first thing in the morning and late at night every day. I have worked enough to determine it doesn’t belong to any staff member in the shop I work at and the other shops on the site have been closed until recently due to the corona virus. It has been in the same space since at least the beginning of April, if not longer. It is a Vauxhall corsa in black and the number plate is LG05 NXH. The address is 108-110 Whittlesey Rd, Peterborough PE2 8RJ