Build up of rubbish left next to public bin

Reported in the Rubbish (refuse and recycling) category anonymously at 23:00, Thursday 28 May 2020 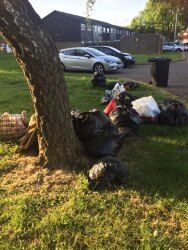 Build up of rubbish left next to public bin. numerous black bags of rubbish. At least 10. This happens every week. Perhaps cameras might be useful to catch people dumping stuff here.