Reported in the Abandoned vehicles category anonymously at 19:47, Saturday 9 May 2020 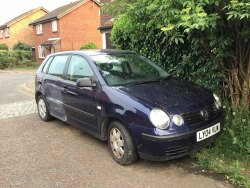 Abandoned car left on side of road next to 52 Uplands. (The occupants of 52 Uplands do not own the car). The car has not been moved for more than 6 months. The Car owners lived at 64 Uplands and moved out of the property several weeks ago and Neighbours witnessed them siphoning off the petrol in the car before they moved. Since they have moved, they have not been back to the car and the car has not Been moved.