Reported via Android in the Flytipping category anonymously at 17:02, Monday 20 April 2020 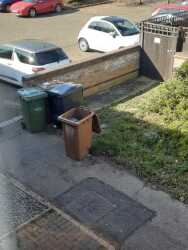 As you can see by the photo that there has been 2 brown bins ( contaminated) and a green bin dumped here for some number of months. The black bin from no.34 Meriton has just been put out today the 20th april ready for collection next Thursday which will be 30th april ! Also they have dumped a childs car seat here also