Reported in the Abandoned vehicles category anonymously at 08:05, Tue 7 April 2020 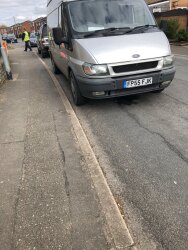 This van has been left here for over two weeks now it has a note in the window saying it’s being recovered on Monday. Two Monday’s have passed and it’s not moved or been touched. It’s parked on a busy junction. The vehicle is done and MOT almost expired. It’s been abandoned.