Rubbish yet again behind no 18 stagsden

Reported via Android in the Flytipping category anonymously at 13:56, Monday 30 March 2020 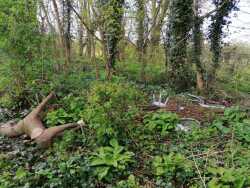 There has been a long ongoing issue with rubbish thrown into pathway that runs down the side of number 18 Stagsden (been told its the occupants of no 18) and the council sent out a couple of guys a few days ago and they cleared it all but today I've seen new items of rubbish out there including a bike and rocking horse. Was also told they have dumped a trolley full of rubbish in the car park in Stagsden as well which I've seen